This is a second installment of a series of posts on putting together an online community. Each week we document our progress with Meteor Daily, a twitter account covering everything around Meteor application platform. The first edition can be found here.

7 days ago, we started off with a twitter handle, a tweet and 6 followers (4 out of which were in the ‘friends and family’ category). As of today, the stats for the account look as follows:

This looks nothing like crazy growth people over at growthhackers.tv talk about, I know. If you still have not lost interest in this post, here are the steps we took to get there.

From day 1 we clearly defined what we will be talking about through our Twitter channel. The more specific the subject is the easier it is to really focus on it and start looking for interesting angles to approach it.

###Get disciplined about tweeting - ode to Buffer

As you are staring at that unappologetically elongated ‘0’ next to the word ‘followers’ on your Twitter, you realize pretty fast that the only way to start getting people’s attention is by producing tweets. Since your initial reach is negligible, you need to get persistent - which means a lot of tweets.

Another immediate realization is that your tweeting ordeal should be industrialized ASAP to keep your mental sanity and have time to do other things with your day. There are a few tools out there solving this problem - we decided to go with Buffer.

If you have not used Buffer before, it’s pretty much a little box where you put your tweets every morning and then Buffer just goes ahead and tweets things on your behalf while you are out fishing. They do other things as well, so you might want to take a look.

Setting up Meteor Daily was somewhat similar to getting a dog. Every morning for the past week, I would get up, brush my teeth and head over to top off my buffer for the day.

A lot of our interaction this week was centered around reaching out to people on Twitter. Doing small things like saying ‘hi’ or starring someone’s ‘update’, making a suggestion or answering someone’s question or even saying something silly:

feels like #meteorjs community could use some meteor memes - most people tweeting about meteor seem too serious. wdyt?

Hello World! Post your @meteorjs inspired memes here! Thanks to @meteordaily for challenging me to create the first one. :)

Besides helping community spread the word and highlight interesting content, we decided to start contributing by compiling a list of projects and companies using Meteor platform. We published it as an editable doc open to everybody. Over the past week 10+ new projects have been added by the community.

One of the beneficial side effects of this experiment is that it allows us to stay informed and super connected to the community we are excited about. We sift through tons of content daily to surface the best stuff to our subscribers. I’ve been using TweetDeck heavily to keep an eye on a bunch of streams at the same time. 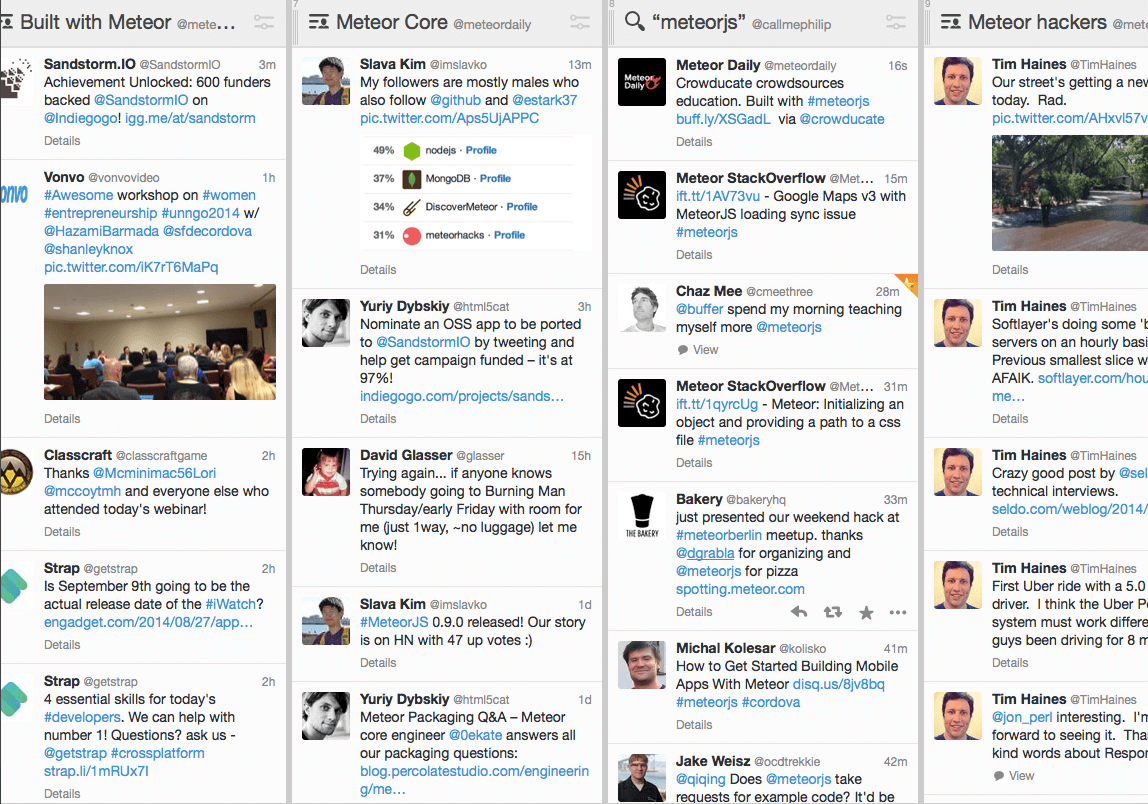 The goal is to continue growing Meteor Daily in the same organic way and start looking a closer look at how different content pieces perform and experiment with the content of tweets.